Why Stallman is wrong

Richard Stallman (also known as RMS, from his initials) is considered one of the fathers of the Free Software movement. I have a deep respect for someone who dedicated most of his life to a noble cause. His latest article is about “Reasons not to use Facebook”. 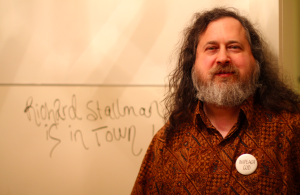 The article is smart, factual, and well written. Unfortunately, there’s a fundamental flaw in it.

The problem with his view is that MOST people would not be able or willing to give up using Facebook for these reasons. Let’s take a quick look, and imagine the “average Joe” pondering whether a reason is good enough or not.

The need to use a real name Well, Joe would be ok with it. He wants his friends to know that he is in fact that guy on Facebook.

Censorship Joe doesn’t care about censorship in Russia or Turkey, because he doesn’t live there and doesn’t really see the harm.

Privacy Joe doesn’t believe, or doesn’t care, that having his personal data shared with Mastercard will actually lead to him spending more. Why?

Ads Joe sees ads everywhere. On TV, while driving, when searching the internet. Why Facebook should be different? It’s free at least.

Psychological harm Joe is not prepared to enter a decade-long argument with his kids on why they shouldn’t use Facebook. All their friends use it, and that’s it.

Taxes Facebook is a tax dodger. And so are many other companies. And Joe either doesn’t know, or doesn’t care.

Most importantly, Joe viscerally knows that his actions alone won’t change a thing. His peers, his friends, his kids’ friends use Facebook. It’s a necessary evil. Joe has other things to worry about in life, like his job, his mortgage, or how to hide his lover from his wife to avoid an expensive divorce. Whatever it is, Facebook and privacy and freedom are not his primary concerns.

Joe doesn’t want a list of reason why he shouldn’t use Facebook. He wants a valid alternative. The alternative doesn’t exist (Diaspora, really? Good luck with that), and therefore he’ll just keep using it. He follows the herd.

Conclusions I don’t like how Facebook behaves, and I pretty much agree with many of RMS’ points. However, his way to convince people is utterly wrong and almost useless. I wish he, and his accolites, would realize this, and maybe change tactics. I would be very happy to see them successful in these campaigns, because privacy matters and freedom matters. In this world, money drives many things, and the individual person doesn’t have much choice in most cases. Using DuckDuckGo instead of Google or Bing might be a good start to improve your privacy, but it’s not for everybody. Using Bitcoin? Definitively not for everybody. Tor? Only for a selected few. The tools are there, but are not good enough for the average person to justify the switch, and the effort.

There should be another way. I don’t know which one though.